Adelaine (Ad) Hain died at the age of ninety-two earlier this year. Walter (Wal) her husband had died three years earlier at the age of ninety-one. Ad and Wal is an impressive memoir that chronicles the lives and times of this ordinary couple that did extraordinary things.

The uniqueness of their story is in the absence of an Aha! moment. There was no grand ideology that directed the path they took nor was there anything in their earlier lives that led to the choices they made. As the book points out and they confirmed elsewhere; they did what they felt was expected of any decent human. Without much analysis, they stood up against the tyranny and evil of apartheid. To them, multiracialism was a normal fact of life and they took every available step to voice disapproval and act in defiance of that evil.

Their acts of duty led to sacrifices and a legacy that spoke and still speaks against the tyranny of evil that was apartheid. at no time and in no greater circumstance was their sense of duty to the struggle demonstrated more than during the issues around the 24th July 1964 bomb explosion at the Johannesburg rail station. Despite their anti-violence stance, they (and their children) were a bulwark for John Harris and his family. The sacrifices they made as a family for John Harris’ family even after he was jailed and subsequently hanged for the bombing seemed natural to the Hains’.

The values they instilled in their children during the struggle must have been the seeds that bore fruit in those children, particularly Peter Hain, who has remained a voice of reason and for good in a political world where clowns and charlatans hold sway. His dissenting voice even as a cabinet minister in the British government during the Iraq invasion is a pointer to this. Like other white stalwarts of the apartheid struggle, what stands out about Ad and Wal Hain is that they could have revelled in their whiteness and maintain silence while apartheid and its perpetrators roared on with its ugly face but they did not. Even after they were harassed out of South Africa and into exile in Britain, they continued to lend their voice, courage and humanity to the struggle as the resolve of evil was gradually but surely being eroded until apartheid fell.

While post-apartheid South Africa has not unfolded as anyone anticipated, Ad and Wal lived long enough to see that their sacrifices were well worth it and that extraordinary things can be done by ordinary people in the face of tyranny and inhumane systems even when the people are an orthodox housewife and a city architect.

A Good and easy read. 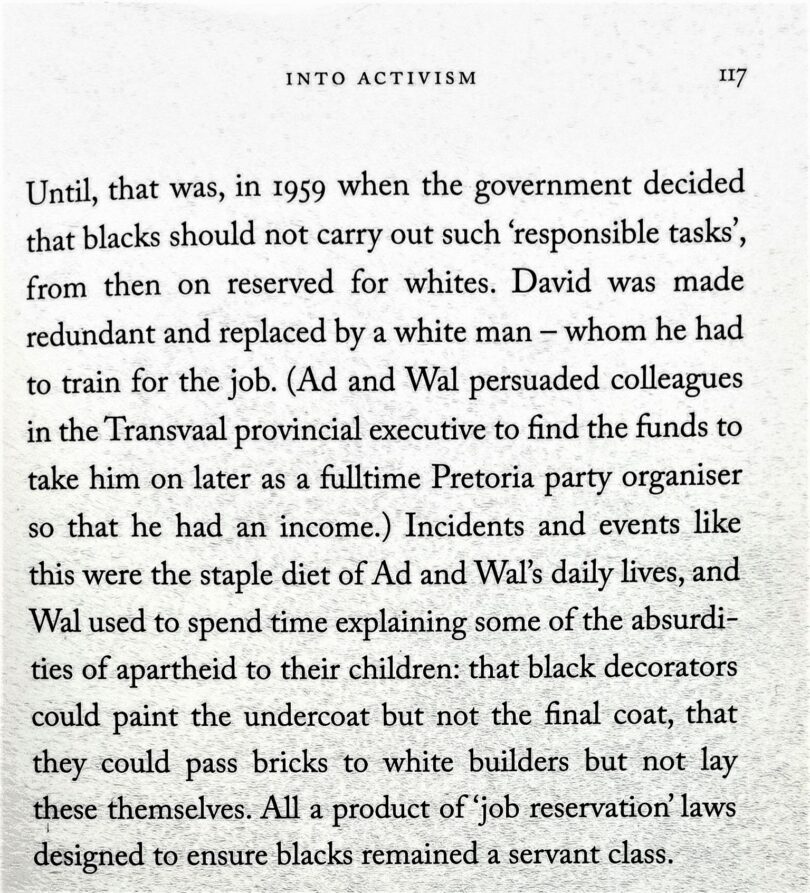