It was only after I picked up Djinn Patrol on The Purple Line that I’ve got a fair bit of Indian fiction in my TBR list.

It is an exciting adventure that I am looking forward to and Djinni Patrol on The Purple Line is an excellent intro to the trio of Indian fiction books on the list. I rarely care about book covers but I made an exception for this book and was sold out on the book such that I bought it even before reading the blurb.

Djinn Patrol on The Purple Line as a work of fiction is as layered as its cover is colourful. At the core of its plot, it is a story about the disappearances (or possible kidnappings) of children in an unnamed slum in India. The bulk of the story is narrated by a 9-year-old boy named Jai that lives in the slum with his parents and elder sister, Runu-Didi. The disappearance starts with hte Bahadur, a classmate of Jai and his sidekicks – Pari and Faiz. Within the next few weeks, several other children disappeear and the disappearances get to its peak when someone close to Jai disappears (or likely kidnapped). Living in the slum, luxury is in short supply and even shorter in the single room Jai and his family share. Their most prized possession is the TV and it has a profound effect on Jai; such that when the disappearances begin, he forms a detective squad with his friends Faiz and Pari based on the influence of the police procedurals he had been seeing on TV. Writing a crime story with a 9-year-old as the protagonist is a tricky affair, one that the author – Deepa Anappara pulls off excellently. Jai and his friends are a concise blend of intellect, empathy and endless hope. The alluring thing about their characters is that despite their ages, the hope they exhibit is not surreal. The slum they live in and the conditions that surround it keep them grounded in the reality that children that young would not be exposed to if the world they are born into was not as unequal as it is.

Any keen reader of Djinn Patrol on The Purple Line would agree that the book would be less enriching if it was just about the disappearances and Jai’s detective moves. All of that is a prelude to the subtle exploration of classism, corruption, environmental degradation and xenophobia that seeps through the basti that these characters call home. Most of the children see their parents cross over to the nearby hi-fi complexes (as they call the high rise condos) that surround the basti where they live. The hi-fi complexes are a stone throw away but their occupants inhabit a different world from the basti residents who do domestic tasks in those expensive apartments. Working conditions are dire for Jai’s mother and her fellow hi-fi workers. These working conditions are detrimental to their family structures and contribute to their absence that led to several cases of disappearances. It is often the nature of the oppressed to turn against one another when oppression intensifies. The police in Jai’s basti is too inept and corrupt to investigate and solve a crime, suddenly the Muslim minority community becomes easy targets for their Hindu neighbours. Neighbours become near neighbours as hate blossoms.

Djinn Patrol on The Purple Line is not crime fiction, so the disappearances (and possible kidnappings) do not get solved in the end. On that front, the plot does not peak. However, it soars from a human angle. The humanity of its characters keeps the reader enthralled. Jai remains a reservoir of hope in the face of despair. Faiz remains unfazed by the discrimination he faces as a minority and he quickly readjusts to every dislocation that inequality throws at him. In childlike simplicity anchored on immense intelligence, Pari asks questions that tug at the heart and reminds us of the unequal disadvantage that the lottery of birth has bequeathed these ones. Djinn Patrol on The Purple Line is an exploration of socially conscious topics in modern India but the inequality it shines a light on is a universal theme and that makes the reading experience a thoughtful one. Highly recommended. 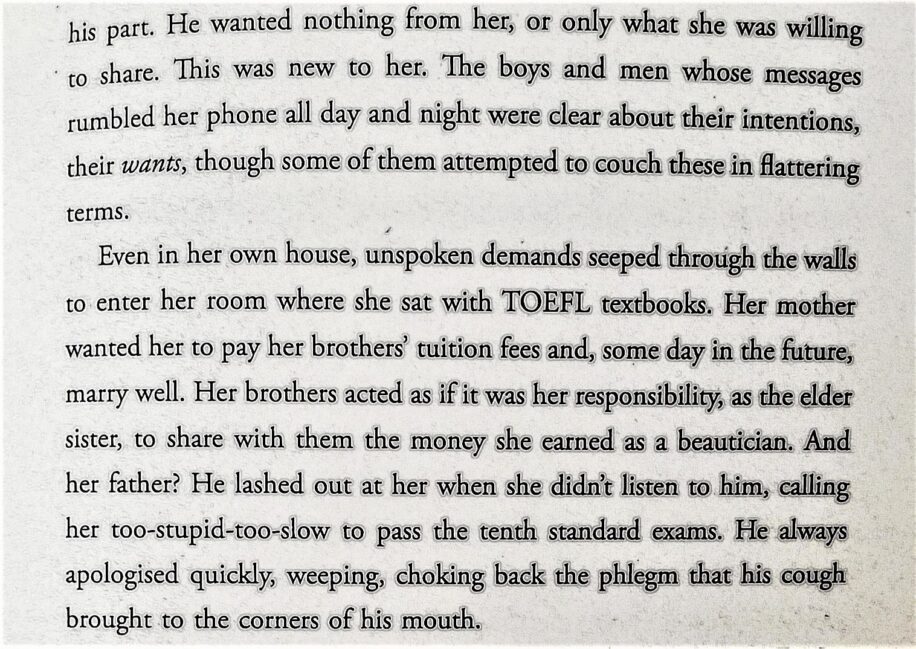