My biggest worry during a recent trip to Athens was that there was no gig scheduled at the Half Note Jazz Club during my stay. I kept refreshing their page and hoping for a change of status but alas it was not to be. I had an almost magical experience at Half Note almost two years ago, so you could forgive me for seeking a repeat.

However, as my folks say, when one door closes, another opens? The door of Afrikana Jazz bar opened and opened very wide too. I searched online and found Afrikana Jazz Bar touted to be the next best thing in the absence of a billed artist at Half Note. I even found that they had three advertised gigs in the week I was available. I decided on this trio and since I rarely make mistakes in such things, I was confident in my choice.

The gig was billed for 10.30pm, and I found my way to downtown Athens in good time as I did not want to miss a minute of a night, I anticipated it would be memorable. My heart sank when I arrived. The venue looked empty and lifeless. Even for a bar, there was not much happening, much less for a music venue. I confirmed that I was not mistaken and had not turned up at a wrong venue. Once sure I was in the right place, I persevered.

At a quarter to eleven in the night, there was a sudden change, the bar was quickly populated without filling up, and three men mounted the stage, tuned their instruments and a night of bliss began. For the next two hours, they completely blew me away with the music produced in that bar. I was surprised to find out that while each of them had released works in different bands, there was none from this specific trio.

I thoroughly enjoyed myself and was almost intoxicated with good music such that over two hours later, they were still playing, and I sadly had to call it quit but with enough souvenirs to keep of this great night. 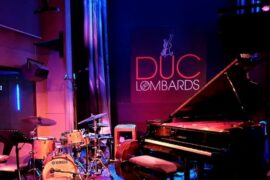